Dilli ki Garmi: The Heat in Delhi and the Best Documentary Award 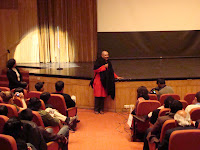 It is winter here in Dilli-but the temperature last night at the India Habitat Center was HOT! Here I am in my hometown and 400 people show up to the Indian premiere of 'A Jihad for Love' last night. To put it simply, it was an overwhelming and very emotional night. The audience temperature was high and that meant a question and answer where I engaged with that large and very supportive audience for more than 40 minutes. For the Tri-Continetal Film Festival that was a record turn out. As one man who came all the way from Dehradun (more than seven hours away) told me: "Thank you Parvez. I have been gay all my life and tonight you opened up a door and gave me courage that I will take away". A group of young Muslim men and I debated for quite a while after the screening-the consensus amongst them was that while they could not say that homosexuality was acceptable in Islam, they were going away with atleast a significant amount to think about. We spoke about the finer aspects of the film, for long in Hindi and Urdu-as I found it easier to communicate the ideas I had in our own languages. They promised me that they would try and spread the word so that more people-and especially young Muslims in India could engage with the film. Clearly many discussions remain to be had and I feel fortunate and blessed to bring this discussion to a clearly engaged and very supportive hometown crowd. The film has also won the Jury Award for Best Documentary Award here and it was ironic for me to recieve the award from the heart of the Delhi political and bureaucratic scene-Delhi Chief Minister Sheila Dixit gave me the award.

This is home my friends and nothing can be a greater or more personal journey for me than to bring this film here. For 400 people to show up to see this film in a week that has seen some of the worst personal attacks on many Muslim intellectuals in India, is a sign of significant hope. I promise to keep you all updated on these rich and meaningful discussions here in India, the worlds only real democracy in my opinion and certainly a nation that has the worlds second largest Muslim population.

The film will also probably get seen by millions more here. For now- I cannot reveal how, but keep watching this space for more updates from here and from the road.

Clearly coming to a non-Western audience for the first time with this film-is a huge personal victory for me and points the way forward to discussions and debate that will be remarkably different.
I am also going to be up-loading an unedited video someone filmed of a portion of the question and answer-so you see it, as it was ; )
at January 19, 2008

Congratulations! We're so proud of you!