So far from the reest of the world. A nation where the politics of race and the guilt of colonialism are being played out, with many wounds not yet healed. But here in Oz, the response to this film has been terrific. We have a third screening tonight at the Dendy in Newtown at 9 pm-this after last week when two parallel screenings had to be organized to fit the overflowing crowd of 680 people. More updates to follow. In the meantime please see some recent press, by clicking on the links below.

COMING OUT AS MUSLIM on NEWMATILDA.COM

GAY OR LESBIAN, AND MUSLIMS TOO on MENASSAT, LEBANON 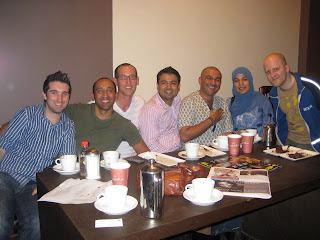 So here I am in Sydney, Australia.
Last night was amazing. The Mardi Gras Film Festival and its courageous and visionary Director Lex Lindsay had to organize a second parallel screening of the film on Oxford Street, just to accomodate the overflow of eager audiences. And yes, Jihad played on two screens simultaneously-that is a total of 680 people in one evening! Everyone crowded into the main theater for the Forum discussion afterwards, that lasted for more than half an hour. We were joined by an old friend, fellow gay Muslim Azeem Ahmad, who is one of the first people I had ever filmed with. Azeem shared his amazing story with the Australian audience and the resonance of the film with current refugee, asylum issues here in Oz as well as the ongoing debates about Islam, was profound.

A woman in Hijab, a few gay Muslims and a remarkably engaged audience-made for a really moving evening.

A lot of press is happening.
An excellent interview with ABC, Australian National Radio is available at the link below-this is the Oz equivalent of NPR and Richard Aedy of LIFE MATTERS did a very thoughtful discussion-here is a journalist who had clearly done his homework and really engaged remarkably well with the film. (the interview is about 36 minutes into the program)
A JIHAD FOR LOVE ON ABC'S LIFE MATTERS WITH RICHARD AEDY

THERE IS A THIRD SCREENING ON WEDNESDAY AT THE DENDY CINEMA IN NEWTOWN AT 9 PM-PLEASE SPREAD THE WORD.

Here are some reactions from last night.


Hi Parvez,
I saw your film tonight in Sydney, it was amazing.
Very thought provoking...
I can’t wait to see how it goes in Turkey and Indonesia.

I most say I was completely overwhelmed and over come w/ emotion after watching your documentary. You are truly an exceptional human being and a revolutionary of our time. Thank you, you have given my homosexual Muslim friends a glimpse of light at the end of the tunnel, letting them know that they are not alone in their struggle.

BEN writes...
"Thank you for your brave, challenging and optimistic film. ben.".

And from Mexico, PEDRO writes...

"Hi, Parvez-I watched your film at the Morelia Film Festival. I was amazed by how you managed to capture all of those feelings in one film. Congratulations! Keep up the work!"

Yes- we are in Egypt Today, an influential Egyptian English Newsmagazine and the response is sure to be overwhelming. Here is the link
Out of the Closet and Onto the Screen
A controversial film breaks open the taboo topic of homosexuality and Islam
By Ethar El-Katatney
We also have a write up in the ARAB TIMES from Kuwait

ADR's very popular NACHTMAGAZIN interviews Mazen and me on their show yesterday-this very good story is at around 18:00 in the interview so just click forward till that time code on this link. YOU CAN ALSO CLICK ON THE JIHAD FOR LOVE ICON ON THE LEFT OF THE PAGE

NEWSWEEK Magazine highlights the film is an excellent article.

STERN, also an influential voice in Germany, also has this on the film

IN JUST THREE DAYS, 1800 PEOPLE HAVE SEEN THIS FILM AT THE BERLINALE!

My Jihad of the Camera goes on and there will be much more to come
at February 11, 2008 2 comments:

550 people in the audience
A chance meeting with Hiam Abbas
John Goetz talking about what he calls 'Catholic Cannibalism'
Berlin-at the heart of Europe's many deep divides and deeply fascinating...
I will soon write more
at February 09, 2008 3 comments:

Big premier tonight as the opening film of Panorama Dokumente
I am missing an 'important lunch' to write this quick post.
Why do we filmmakers have to endlessly network-and gather contacts to make our voices heard?
What is this networking madness? Is there space in the Universe for us all?
Questions of the day as I myself, prepare to plunge into the mosh pit ; )-and yes that will be later today.
Hopefully people will surround the film with love here as well. That for me is most important. I really said everything I could in the film, and it does speak for itself. So please come and engage with the film.
My Jihad continues! Allahu Akbar!
at February 08, 2008 1 comment:

These days, I frequently get emails like these. I will not reveal the identity of this person and am changing his country of origin, but his pain and his dilemma is why I made this film. I am trying to find a way to be in touch with him and have him see the film. Inshaallah, we will all join in the message of hope and the embrace of love and understanding that so many need and need now.

Dear Parvez,
I am writing to you with no prior contact because you are my last destination of hope. The moral dilemma that you convey in your new documentary is eating my from within. I am 17 years old and the youngest of five children, of whom two are mentally disabled. My parents are very religious, and after having lived 17 years in France, they have still not integrated themselves, due to lack of language and difference of religion and culture. I simply need your help because I am alone in the struggle against my parents. I do not know whether they have the upper hand because they know the truth about whether homosexuality is a major sin, but what I do know is that they use it against me all the time. Personally, I am very much certain that I have not consciously made the decision to be a homosexual. I think all my misfortune began when I was raped at the age of six by a teenage friend to the family. I suffered many years of guilt and lonelines, and on top of that, today I am gay. Coming from my family and having my background that is the worst a person can be. So in Nov 07 my parents found out about my homosexuality and my third world war started. I was kept isolated during a month, very much confined to my home with no means of communication with the outside world whatsoever. I was given the ultimatum to either cure my self right away or be murdered and eliminated by my 30 year old brother/stoned to death by my father. Part of the cure would be going to Mecca with my mother in Dec 07, but I refused due to my school committments. They forbade me from seeing my one and only true friend, because he is a Christian transexual boy, and if I would have seen him without their approval, my brother and his wife would hire someone to eliminate my friend too. So I submitted to the atrocities hoping that I would find my way out of them soon. When school started in Jan 08, the social services were contaced, which further infuriated my family. Since then matters have shrunk almost to natural size and today I am no longer bothered by my brother and his wife thanks to an arrangement by the social services.

Please Parvez, I must see your documentary for I can no longer live and love with the knowledge that I am displeasing Allah. Please help me!
at February 04, 2008 1 comment: