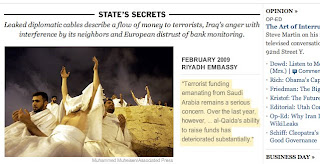 The Gray Lady is wearing her Islamophobia on her sleeve this morning.

Sunday morning, like most mornings I opened from years of habit-the home page of the Times. Peering at the lead story without my glasses I was horrified to find the image of Muslim men praying near Mecca-next to a cable excerpt from (the now hard to access) Wikileaks-the Times had decided this was the top story for us this Sunday.

However next to the excerpt which began: "Terrorist funding emanating from Saudi Arabia remains a serious concern...." there was the unmistakable image of Muslim men praying near Mecca wearing the requisite Ihram during pilgrimage.

Is the Times saying that all Muslim men who go for the Hajj or Umrah pilgrimages to Mecca are a part of terrorism emanating from Saudi Arabia? Are all Muslims stepping into that holy (and unjustly Wahabi controlled land) getting classes in Terrorism 101 ?

Living in the US, I am now not surprised by the Islamophobia of others. I cringe when cartoons depict our (undepictable) Prophet. And yet as a moderate Muslim, I always fight for freedom of expression (I usually attach the rider-"with responsibility")

Throughout history words and images used together convey powerful meaning. All dictatorships, genocidal regimes and problematic systems of power know this. Journalists and photo-editors should know this better than most.

I often defend the NYT to Muslim friends elsewhere who don't trust it.

I wonder if I am the only one to notice what I hope is a lapse of judgment and not an editorial decision.

Below is my hurriedly written letter to the Times. The image grab can be found on my Facebook and if I am able to include it, with this blog-post as well.

As a Muslim writer and filmmaker based in NY, my home-I have always turned to this paper as my primary source of information. In my travels through Muslim majority nations, I have also been very aware of the untrustworthy label easily assigned to your reportage, which I have often defended. This more from a place of knowing that you are also much reviled by the right-wing here in America as being part of some imagined "progressive conspiracy." However, this Sunday morning--like every Sunday morning when I opened the paper in my web browser I was horrified to see an image of Muslim men praying during the Hajj, wearing the requisite "Ihram" next to a Wikileak cable excerpt that says "Terrorist funding emanating from Saudi Arabia remains a serious concern..."

This is blatant "Islamophobia", which your editors surely know is currently much in fashion. Surely a less provocative image can be found to depict a nation, which for many of us moderate Muslims-remains a place we deride for its hypocrisy and totalitarianism but respect as being the home of our two holiest cities. I wonder if the current climate makes it acceptable to use Muslim males in prayer as a suitable image for them usually being branded "terrorists" or singled out at most airports in the world.

Words and images together, convey powerful meaning. Your editors, your web-editors and your photo-editors, I hope know this better than anyone else.

In the past I have considered myself fortunate to have been profiled and written about in your paper. Now I am not so sure.